A downloadable tool for Windows

Wheeler is an application which displays your racing wheel, pedal, and gear inputs for use with Open Broadcaster (OBS Multiplatform, specifically).

It is designed to replace game-streaming setups involving multiple webcams aimed at your wheel and pedals, in games which do not support onscreen wheel and pedal display, such as DiRT Rally.

Wheeler does not require and does not connect to any specific game, but reads data directly from your input device. Individual inputs are configurable, and wheeler supports the use of multiple joysticks simultaneously.

Wheeler can display wheel position (with configurable rotation), throttle, brake, clutch (optional), current gear (if using an h-pattern shifter), sequential shift inputs (displayed as a momentary up or down shift), and handbrake (analog or digital).

While wheeler supports gamepads, using a gamepad-specific overlay tool will provide better information to your viewers.

Plug in your joystick(s). After launching Wheeler, you can edit your configuration by pressing 'c'.

For each input you'd like to configure, turn your wheel, push a button, or a pedal, and press enter when you're done.

To remove a selection, press the delete (not backspace) key.

If you do not want to display the clutch (or throttle, or brake) input, clear the input selection for that pedal and hit enter to skip it.

Similarly, if you're using a sequential shifter, you will want to configure a control for shift up and shift down, while leaving gears 1 through 7 and reverse blank, so that gear information will not be shown.

While Wheeler will work with Open Broadcaster, fancy non-greenscreen transparency is only possible in OBS Multiplatform.

When I open Wheeler, the window isn't transparent
That's normal, the background will only be transparent when recording or previewing in OBS Multiplatform

Wheeler's background isn't transparent in the OBS's preview window or my recordings
Make sure you've selected "Allow Transparency" in the OBS game capture.

There is no "Allow Transparency" option in my game capture settings
Make sure you're using OBS Multiplatform, not Open Broadcaster

I'm getting major performance drops when recording with Wheeler and a game
There are a few possibilities here: 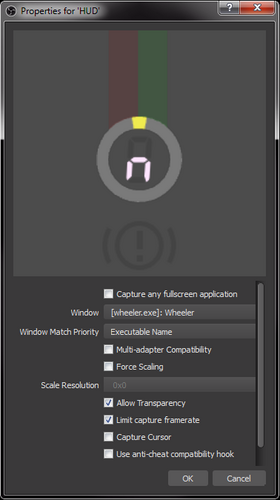